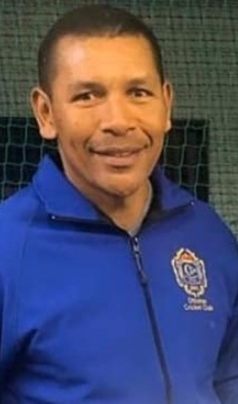 Would you like to tell us a bit about your background as a player and coach?

“I played first class cricket for Western Province and the Free State Eagles. I coached the following teams:

At professional level I coached the following teams.

At club cricket level I coached.

How did you end up at Quick?

“I’m not sure who contacted me from Quick. It might have been Lucas Hendrikse.”

What is your first impression of Quick?

“I always knew Quick CC to be a very friendly club as I played a few games against their first team during the club’s dominating era in the Top Klasse. They were fierce on the field but always welcoming and happy to spend time with the opposition. The club has been blessed with an abundance of potential and some very talented players. Most however, lack structure and an understanding of the game. This is why the club management brought me over to the club. To not only address those issues, but to also assist in creating a good and healthy club culture.”

What are your plans with Quick?

"Our 1st team are in desperate need of getting some of the younger players challenging for places in the team. This will however take 3 to 5 years and we need to be patient with the processes. Success will not happen overnight but when we do get the structure and environment right then the club will be back to where it should be, in the Topklasse and with our junior players challenging for places in the Dutch Lions teams.

In keeping the best for last is our female cricket members. This section is packed with talent at both senior and junior level. The senior team provided me with a pleasant surprise during the one session that I have had with them. I just see talent in the team. Every single one of them have so much potential.

My short term plan is to get the culture right, to create a better understanding of what it takes to extract every ounce of potential within every player and to develop a good understanding of the game. I make no distinction between the performance players (those blessed with talent to play in the top teams), and the recreational player (those that play for fun and trying to perform at their level).

A. The long term plan is to see Quick play in the Topklasse and challenging for the league every season.

B. To get the 2nd team players applying pressure on the first team players with their individual performances.

C. To see our junior players representing the club at all age groups in the Dutch Lions/Lionesses."