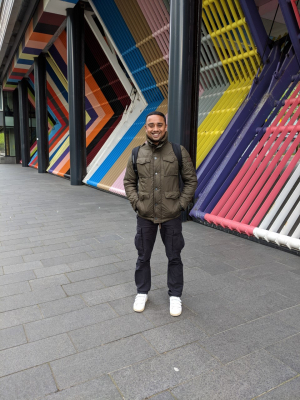 My best memory of cricket was back in India, when I had started playing cricket at the age of 9 yrs. I was spotted by a coach, who was also an International umpire. He approached me and offered me to be a part of his cricket academy. I started learning and playing the game professionally then and always dreamt of becoming a cricketer. The coaching sessions and the matches we used to play against other academies brings back the memory of how competitive the game was back then and the competitiveness has only gotten better. The best memory during that time was when I had won a Man of the Match award in just my second game at the age of 9, where I scored 36 runs and took 3 wickets for 12 runs in 4 overs. My academy ended up winning the tournament at that time.

My favorite cricketer in Quick is Edgar Schiferli. He brings a lot of experience with himself after having played the game at the highest level against the best in the game. His approach towards the game despite, after years of retirement is something that you can look and learn from. His skills and his eagerness to pass on his experience and transfer the knowledge to cricketers in Quick and is also highly commendable. When you are playing with him in a match, you can just watch him and learn on how he manages his performance at various stages of the game and can be seen contributing to his full potential to win the game for your team. At the same time, I also find him extremely helpful in the middle of the game, where he comes and provides his advises on how you should bat/ball, as per the situation of the game at that point in time. His inclusion in a team itself bring a lot of positive vibes and makes the team look stronger. He has a definitive impact on the team, when he plays.

This season, I would want to talk to my captain well in advance before a game to ask on what my responsibility would be in the upcoming game. I would then make efforts during the practice sessions to work specifically on what I need to deliver in the forthcoming game instead of having a regular practice session. I would start focusing more on my deliverable, so that I can contribute during the game and try and live up to the expectation.